Jami (pronounced Jaami) is a small village, in the Jami Mandal in Vizianagaram district in the state of Andhra Pradesh India.
This village is on the bank of the river Gosthani, which has its origin in the lime stone caves of Borra. It has an elevation of 46 meters (154 feet).

Pastor Annie and Victor Abela  work with Pastor John Victor Dunna, who has pastored here since 1980 along with his wife Vajaya and family.

​We provide finances for wells, buildings, education and other basic needs as Pastor Victor ministers the love of Jesus in other practical ways. 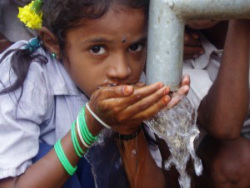 Fresh water saves lives!
Water is an important resource and one cannot live without it.
More than 1.8 million children under the age of five die each year from illness associated with contaminated drinking water. Primary diseases contracted from unclean drinking water include cholera, diarrhoea, typhoid, roundworm, hepatitis and dysentery.
It is estimated that over 80% of India's population does not have access to clean drinking water.

In India, most life-threatening disease stems from impure drinking water which is collected from ponds, canals, and rice paddies – the same water used for bathing, laundry, and watering cattle. A fresh-water well is a gift to people of all castes. It is thirst quenching clean water.


This reality is especially true for rural villages. In Andhra Pradesh, a mostly rural Indian state, there are over 3,000 villages without a water source! Rural Indian women spend an average of four hours a day collecting and purifying drinking water. According to The World Health Organisation, India's water shortage is expected to worsen in the coming years.

There are some villages facing water scarcity.  In summer this problem is particularly bad. Most villages do not have bore wells, to bring water they have to walk between 1 and 5  kilometres.  We can provide them a bore well in the public places as a gift of Jesus, with the possibility to win them for the Lord’s kingdom.